The Difference Between 'LAW' and an 'ACT' 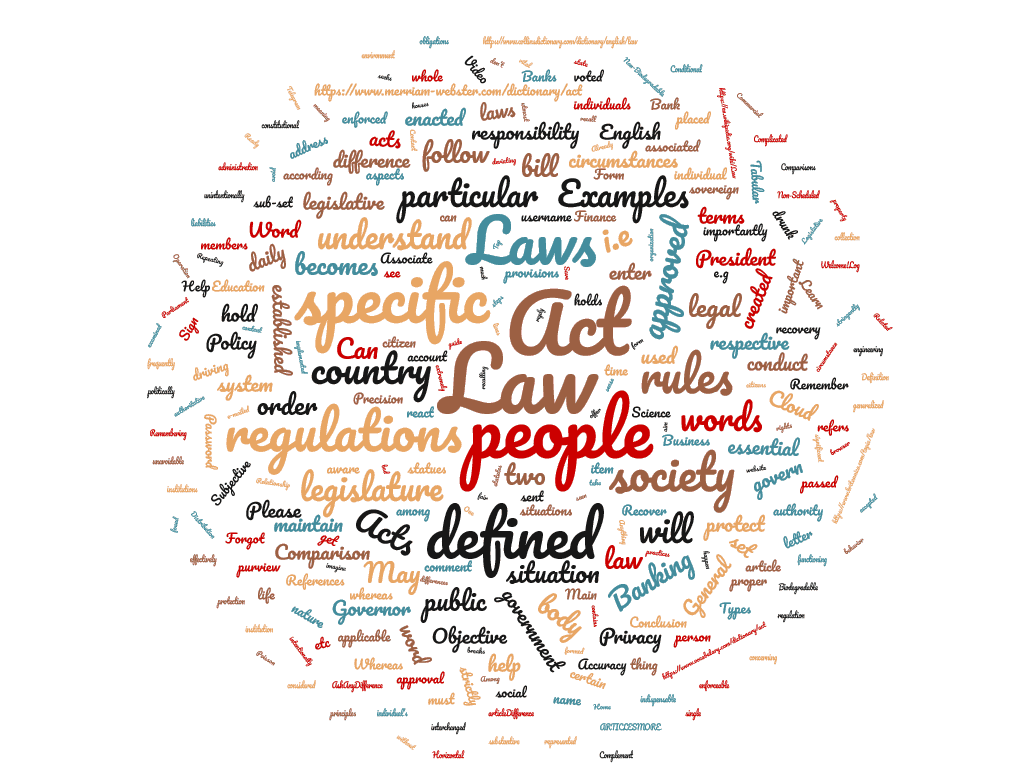 THE DIFFERENCE BETWEEN 'LAW' AND AN 'ACT'

If like me someone mentions legal stuff it goes over my head quicker than Storm A to Z – however; it would be helpful if I explain some of the legal Mumbo Jumbo that is quoted to you so that you can understand your rights and what is what.  I thought I would start with the difference with “LAW” and an ACT.  This is the difference between not arguing when it comes to Law and you have some leeway when it comes to an Act.

The difference between act and law exist in their formation. Law is a word that is easily understood by common people. It is a piece of legislation that is binding upon people and is followed by all. It has provisions that are applicable on people in different circumstances. Laws are made by the legislators who are the members of the parliament.

Many people cannot make out the difference between a Law and an Act as they believe both are same and interchangeable. Well, they are right to an extent as Acts of Parliament are a type of Law and there are other types of legislation also. This article will try to clarify the doubts people have regarding differences between Act and Law. If you talk to a legal person, he/she will tell you that there is not much to choose between an Act and a Law. This is because an Act is a law of the land. Let us see how.

What is LAW  - Is a system of regulations that are made to govern people, to help them in their conduct according to the norms of the society. Laws are generally for the protection of people and to maintain public order. Laws are there to guide and protect people. Laws are more general in nature, and they are not complicated. We get to see what we should do and should not do directly. For example, walking on the railway line is prohibited. Here, we see that walking on the railway line is prohibited. We do not have to spend time trying to understand it as it is simple and direct. Law: Laws are rules and regulations passed by the government to guide the behaviour of people. Laws are absolute which means if you do not comply you are breaking the Law and you can be penalised.

What is an ACT

On the other hand, an 'Act' is a piece of legislation that is more specific and applies to particular circumstances and specific people which allows for exceptions to the rule. For example, there are laws against drink driving and people are aware of them -  whilst Drunk Under Influence (DUI) is the specific Act and is not law that pertains to drink driving. Furthermore, Acts are made by the government, to let people know about provisions pertaining to a specific situation, and how and why public is required to follow these mandatory rules and regulations under certain circumstances.

We said that an Act is more specific. That is because usually an Act is a constitutional plan that is created by the government. This has to be created at parliament. It also has to pass the vote of the parliament ministers in order to become a law. Until an Act is passed by parliament, in order to turn it to a law, an Act is known as a bill Through an Act, the ideas of the government are made mandatory for the people of the country.

Act: Until the act gets passed in the parliament, it is known as a bill. Once passed, it may become a law.

Law: To understand common rules and regulations we always refer to laws.

Act: To know about more details referring to some laws, we need to study relevant acts.

Law: Law directly tells people what should and should not do. If you do not comply with Law you are 'Breaking the Law' this is punishable.

Act: Acts are more descriptive and contain details on why and how laws are enforced. These are more important in law courts to get a complete set of information which enables lawyers to talk in favour of one side.

In a nutshell, an ACT is NOT law, to become law an act has to be passed by members of parliament before it becomes law, until then it is simply a piece of legislation that describes a potential law. This means that it is open to interpretation. Whereas a law is plain or simple – you Will do this or You are not allowed to do that.

LAWS are the definitive definition and always over-ride an act if there are conflicting interests.  Right – hope you find this clear because this will be needed when we deal with nasty little blood suckers.

Frequently Asked Questions
I BUILT MY SITE FOR FREE USING